↓
Home Menu ↓
Skip to primary content
Skip to secondary content
Home→Uncategorized→If You Can’t Love Yourself, Can You Love Others?

Unworthy: How to Stop Hating Yourself
Buy Unworthy at Amazon
"A practical, if heartbreaking, roadmap. ... This book should be required reading for anyone suffering from low self-esteem, and while it will likely cause readers to tear up repeatedly, the empathy and grounded advice is sure to help inspire healing."
-- Publishers Weekly

"Unmasking and destigmatizing the mantle of doubt, fear, guilt and self-blame under which millions of otherwise average Americans quietly suffer and detailing the ways in which self-haters can start to build toward a more accurate understanding of themselves. ...Brutally candid. ... A clarion call to those who struggle with self-loathing that they aren't alone or powerless and that they are capable of healing their battered souls."
-- Forbes

Henrik Ibsen’s 1896 play John Gabriel Borkman was a massive hit when it first appeared on Scandinavian stages. Basically it’s the sad story of Ella Rentheim, a poor woman whose lover, the ambitious John Gabriel Borkman, leaves her in order to marry her far richer twin, Gunhild.

At one point in this play, Ella  explains eloquently to Borkman how his departure shattered her self-esteem.

“There was a living, warm, human heart that throbbed and glowed for you. And this heart you crushed. Oh worse than that! Ten times worse! You sold it. … You have murdered the love-life in the woman who loved you.”

She also explains something that many of us know firsthand, all too well: that having low self-esteem can make it very difficult for us to love not only ourselves but anyone or anything else.

“I have lived my life as though under an eclipse. During all these years it has grown harder and harder for me — and at last utterly impossible — to love any living creature. Human beings, animals, plants: I shrank from all. … And yet I was not like that when I was young; that I remember clearly! It is you that have created an empty, barren desert within me — and without me too!”

It’s an old play, written by a 19th-century Norwegian. But it’s still being performed on the London stage: 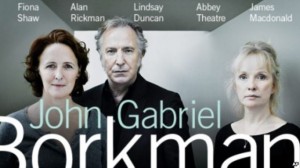 And for good reason. Because haven’t we all, at least once, felt a little like Ella?